Oops, I dropped my hard drive!

Well to be truthful it had packed up so it wasn’t much of a loss. And it was only a 1Gb drive in the first place. As you can see below once the lid is off all the major mechanical components are exposed. You may have seen elsewhere that a hair or even a particle of smoke is enough to make a hard drive head crash fatally into the disc – so don’t try this at home. Unless your drive has taken a dive too of course.

The disc platter is very rigid. It’s made of aluminium with a magnetic coating and it is spun round at 7200 or 5400 RPM by a motor underneath. The head is a tiny ferromagnetic device that is aerodynamically designed so that it flies above the disk in the air-flow generated by the disk’s rotation. The head generates a magnetic field when current is passed through it so data can be recorded onto the disk. The clever bit is that it also generates a current when a changing magnetic field is passed across it which means that the same head can also be used to read data from the disk. 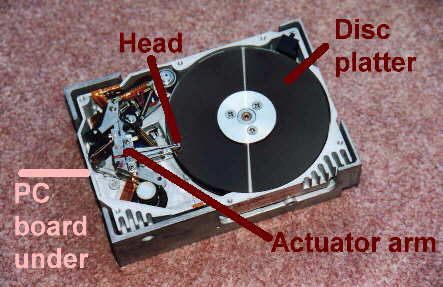 The drive is controlled by electronic circuitry on a PCB (printed circuit board). The PCB is on the bottom of the drive.

The control circuit moves the actuator arm to position the head over the correct part of the disk. The electronics can tell by reading the formatting information where the invisible magnetic tracks start and stop.