Here’s another in our line of technology autopsies – a GSM cellphone. This one came from a car boot sale but had no subscriber identity module (SIM) card so it wouldn’t work. The SIM card slotted into the back of the case, between the battery and the main printed circuit board (PCB).

As you can see this phone has separate loudspeaker and piezo sounders. The piezo sounder is used for the ring tone. It consists a small crystal which makes a noise when it has a voltage applied ot it. They are very efficient (ie loud!) but are only good for simple tones so can’t be used for reproducing speech.

Having a separate loudspeaker also means less chance of getting deafened if the phone rings as you put it to your ear! 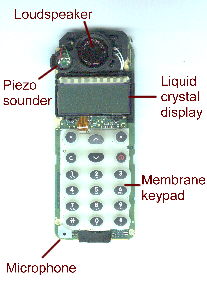 The liquid crystal display needs virtually no power so is ideal in a battery-powered device like a phone. They are also pretty cheap to make which is popular with manufacturers!

The microphone consists a tiny electret which is the voltage equivalent of a magnet. It has a tiny voltage across it at all times which varies with the changes in air pressure that we know of as sound.

The main part of the phone, the audio and digital processing circuitry and the radio frequency circuits are on the PCB, which has components on both sides. Here’s what the underneath of the PCB looks like: 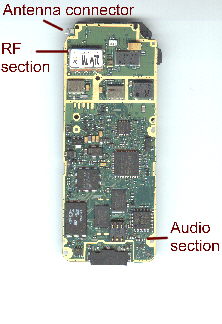 ← So how does a TV antenna work?
Autopsy of a hard drive →